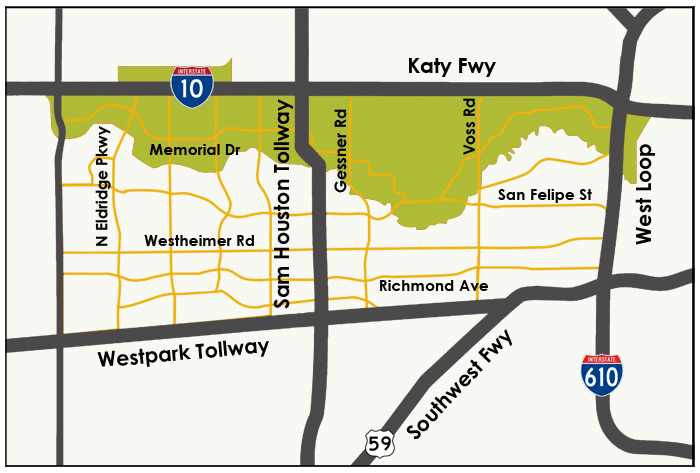 Memorial has miles of beautiful trees, large lots, manicured lawns, and some of the most expensive homes in Houston. Although Memorial Drive originates in downtown Houston, the Memorial area is generally regarded as those neighborhoods that lie between the 610-Loop on the east, Highway 6 on the west, I-10 on the north, and Buffalo Bayou on the south.

The Memorial Villages, are independent municipalities with their own police and fire departments, water systems, and political structures. They are found west of Chimney Rock road. From east to west, they are: Hunters Creek, Piney Point, Hedwig, Bunker Hill, and Spring Valley (north of I-10).

Along Gessner and Beltway-8, upscale shopping, dining and entertainment abound, along with Hermann Memorial Hospital and Health Center at Memorial City. Beltway 8 provides the area with quick access to all parts of the city; both airports are within a 30-minute drive, I-10 is immediately accessible, and I-59 is only minutes away.

West of Beltway 8, Memorial Bend, Gaywood, Yorkchester, Yorkshire, Wilchester, Nottingham, Nottingham Forest, and Westchester are neighborhoods with wooded lots and a green space with a jogging trail and horse stables.

Major draws for this neighborhood are the large lots and strong schools of the Spring Branch Independent School District. The communities are close to the Energy Corridor, many stores, and restaurants. Other pluses are the neighborhood recreation facilities, Buffalo Bayou, Edith L Moore Nature Sanctuary, and Terry Hershey Park. Commuters like the proximity to I-10 and Beltway 8.

Our property on 13923 Myrtlea Drive is located in the prestigious Nottingham 4 neighborhood, which is nestled inside the Memorial Super Neighborhood.  Despite having only 159 homes, it is an independent neighborhood consisting of Britoak, St. Mary’s, Myrtlea Drive, Kingsride, and West Forest. Nottingham is part of Spring Branch ISD and is zoned to Wilchester Elementary, Memorial Middle, and Stratford High school. Westchester Academy for International Studies is also in the area and is a district charter school for grades 6 through 12. 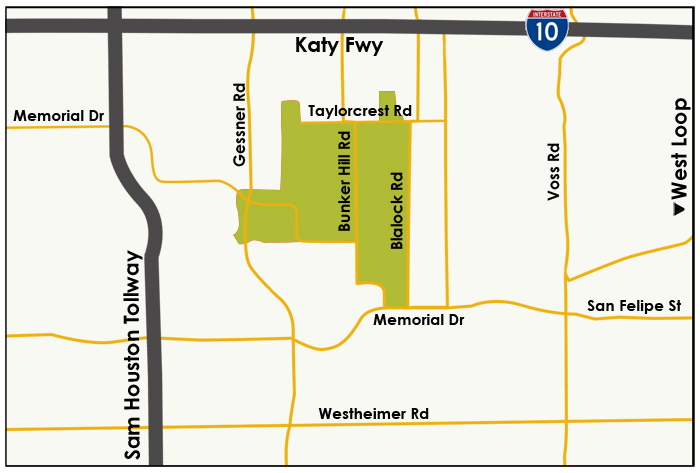 Bunker Hill Village, is one of six villages that form the upscale area west of downtown Houston known as Memorial Villages. For more than half a century stately homes in Bunker Hill Village have provided homeowners with a private escape from the hustle and bustle. It is a quiet, wooded community with convenient access to Houston.

The exclusive Bunker Hill Village, founded in 1954, is a city of homes with an affluent population. Incorporated to prevent annexation by Houston, the city works to maintain a small, country atmosphere and preserve the quality of life its residents enjoy.